From Binary-Tools Wiki
Jump to navigation Jump to search

Oases are fields on the map, which can't be settled on, but which can be captured by kingdoms and be annected by villages to increase the production. Wild oases are protected by animals, the nature troops.

As for all NPCs, one receives only 50% of the usual off points for defeating animals in an oasis. 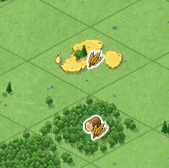 Two oases on the map

At the start, all oases in the world are wild. To make use of an oasis, it has to be freed by killing all animals with attacks first. As soon as all animals area dead, the oasis is free and can be used. If the oasis abuts on the ow kingdom (counting diagonally), it will be part of the kingdom upon freeing it.

Wild oases produce small amounts of resources and have a storage capacity of 50 per animal, which lives in the oasis.

Apart from attacks and espionages, no interactions with wild oases are possible. Reinforcing troops return immediately upon arrival. This can be used to save troops for a certain time.

An oasis without animals is a free oasis. It can be annected, reinforced and attacked.

Free oases, that are part of a kingdom, generate an one tile large area for it, containing only the oasis. The area is considered to be fully part of the kingdom, i.e. it can be used for tribute paths as well as for the capital-to-capital connection for the kingdom union. Enemy kingdoms can steal an oasis, if it abuts on their area (counting diagonally), by killing all troops in the oasis. Then, the oasis becomes a part of the enemy kingdom and generates area for that kingdom now. Existing annexations will not be dissolved thereby. Free oases of a kingdom stay part of it, even if they don't abut on it anymore, e.g. after closing a treasury. They still generate their area in this case.

Free oases become wild again after an indeterminate time. This can be prevented by sending at least one unit as reinforcement or by annecting it.

Free oases have a defense bonus for reinforcing troops, compareable to the water ditch. The defense bonus depends on the oasis type.

Free oases can be used to increase the resource production of a village. For that, it has to be annected in the embassy of the appropiate village by selecting an oasis of free choice in the tab oasis. As soon as an oasis is selected, it gets annected and it starts to take effect. Every village can annect up to three oases. Annected oases can be removed and replaced in the embassy at any time. Upon destruction of the embassy, all annected oases are removed.

Requirements for the annexation:

Oases, that belong to a foreign kingdom, can be annected normally, but troops don't produce resources and don't exert influence there.

Every oasis has a ranking, in which all players, that annected it, are listed. The more influence a player exerts on an oasis, the better is his rank. The influence of a player is the sum of the influences of his villages, that are inside the 7x7 of the oasis plus the amount (not consumption) of his troops in the oasis. Troops only exert influence, if the oasis belongs to the political kingdom. The influence of a village is calculated by the following formula:

The better a rank of a player in the ranking, the higher the %-production bonus and the more troops of him can produce resources there:

The production of a village with four claypits level 10, brickyard level 5, rank 2 in a clay oasis and gold production bonus is calculated like this:

Each oasis has one or two resource types, for which it grants a bonus. The defense bonus depends on the types aswell and only counts for free oases.